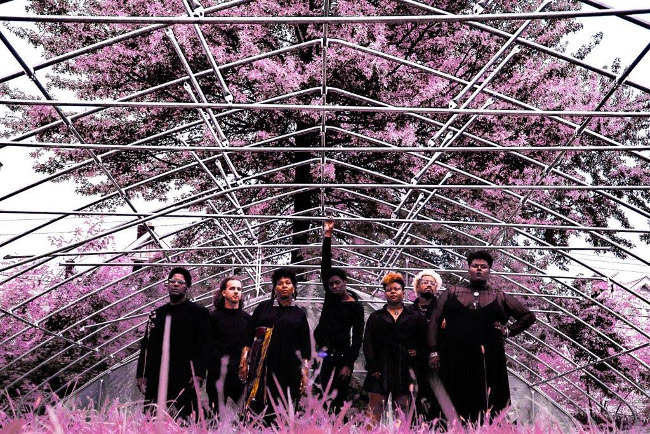 WATCH "SO YOUNG SO"


Out May, 15th on Don Giovanni Records, The Cycle is the fifth album by Mourning [A] BLKstar. It’s the Cleveland-based collective’s masterwork -- a double LP spanning 20 songs and three singers, touching on neo-soul, hip-hop, and the cosmic expanse in between/beyond. It is their song cycle, written in a time that just may need a song or two in support of and in love and power to the living.

The Cycle was created in a 900 sq. ft. storefront on Lorain Avenue in Cleveland, Ohio, where Mourning [A] BLKstar practiced for three years. The band met weekly in that space on late Wednesday nights that often stretched into the early morning. Together, Mourning [A] BLKstar watched the flicker of the street lamps against damp sidewalks, listened to the sounds a city makes in every season and watched a cast of characters from the windows -- many of whom stopped to listen or dance along with the music.

The band wrote The Cycle together in that storefront; RA Washington brought in 12 song sketches and the rest of the group wrote their parts on the spot. It was an epic first practice -- a moment of spontaneous creative energy that lies at the heart of the record. The songs came together so fast that Mourning [A] BLKstar performed many of them for the first time just two days later at a showcase for The Panza Foundation, a local arts advocacy nonprofit dedicated to the support of Northeastern Ohio Musicians.

M[A]B is a multi-generational, gender and genre non-conforming amalgam of Black Culture dedicated to servicing the stories and songs of the apocalyptic diaspora.


MOURNING [A] BLKSTAR ON TOUR